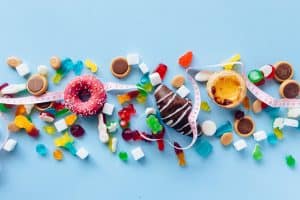 Tommy likes everything tasty; he eats takeout several times a day using delivery services, takes in a lot of sugary snacks, rarely eats vegetables or fruits that are not sweet tasting.  Additionally, his water intake is about 1 bottle of water daily, he opts to drink sodas and energy drinks because he works nights. Losing a significant amount of weight would be ideal for health concerns, but Tommy hasn’t started working out yet, it’s on his to-do list.  Anyhow, Tommy goes to the doctor because his vision is blurry, and tests reveal that he has developed Type 2 Diabetes.  Tommy is concerned about diabetes, doesn’t want to go on Rx medication but knows that he must do something. He calls me for an Herbal Consultation.

Of course, surely the answer is simple enough, right “Stop feeding it”.  Not as simple as one would think.  If it was, everyone would reverse their Type  2 Diabetes without fail.  During his Herbal Consultation, as I continued to listen to Tommy’s plight about 5-minutes in, three important observations came to me:
1. He wants to reverse it but wasn’t ready to release habits that manifested diabetes into his life.
2. He lacked education around food with no idea of what to eat for health.  He only knows what he likes to eat.
3. He was fearful that the change in diet would be unpleasurable to his taste buds; this was a major concern for him.
If you were to search Google, you’ll easily find steps to reverse diabetes.  They are there, very plainly listed… exercise more, stop smoking, cut out sugar & eat healthier…etc. So what’s the problem? Those lists are neglectful of one thing: MINDSET! Wait, what does mindset have to do with anything?  It has absolutely everything to do with everything! All three observations listed above are mindset-related.  See, what must be understood is that making adjustments for health reasons is a journey that continues as your needs change, there are times where you will run marathons focusing on long-term success and others where you will sprint, achieve goals quickly.  Having a Growth Mindset is one of the most powerful tools one can have in learning a new skill or reconditioning your brain to think of something in a new way.
Before I could address food choices with Tommy, we had to take a step back; discussing his mindset, ideas around food & his overall wellbeing.  To be acutely self-aware, he had to lay it all on the table; how willing is he to make changes, what those changes would look like for him and where does he start.
Many times we hear people saying that they are “battling” or “fighting” illnesses, diabetes included.  So busy fighting that, often, it’s hard to see that there is another side to fighting: Flourish. How about developing flourishing behaviors so that it’s not a fight?  The way you perceive, believe, and address an issue (mindset) is going to play a major role in your journey and wellbeing.  The more knowledgeable you become and with some guidance, you can manage expectations, habits, and new skills.  Therefore, discovering strengths and building success after success when it comes to your wellness journey.

PrevPreviousWhat Is a Growth Mindset?
NextBusting Myths About Plantbased NutritionNext